Why overtime makes us stupider

Almost half of the people in the EU work in their free time – that is, overtime. A third of those surveyed often or always work at high speed.

But calling from dawn to “fall asleep with your face in the keyboard,” endless emails and Slack notifications may not be hard work, but a fake. After all, much of what looks like super-productivity is just work that helps hide unresolved problems. Such an escape from reality.

We figure out how to stop overwork, get back to a normal pace of life and why overtime makes us stupider.

Back in 1930, the English economist John Maynard Keynes predicted that the development of science and technology will allow us to work fewer hours, up to 15 per week. Many countries (USA, Netherlands, UAE, Japan) conducted similar experiments, but today we can rather notice the intensification of labor, than reduction of working hours.

Randy Simon, Ph.D., from the United States, points out that 40-50 hours a week is a familiar but not quite healthy schedule for most people. If you feel like work is consuming your life, you’re not alone.

In the U.K., government surveys conducted every 5 years show an increase in “work intensification” since the 1990s. 60% of those surveyed in 2017 responded that they work “tight hours” for at least ¾ of their time. 45% of respondents said they work at “very high speed” the same ¾ of their workday.

According to a recent City University of London study, working too hard does not make you richer or help you get ahead in your career. Having analyzed the work, welfare and professional success of 51 895 employees from 36 European countries in various industries, scientists found out that increased effort spent on work, in most cases, had the opposite effect in reducing earnings and inhibited career growth.

Another new study by scientists from Britain Tom Hunt and Harry Pickard proves that high intensity of work increases the chances of “earning” stress, depression and burnout. In addition, people who are used to working at high intensity take sick leave less often and prefer to bear the illness “on their feet”, without taking a break from the work process.

In 2006, Google was faced with employee burnout due to the intensity of work and decided to conduct an experiment – they launched the project “20% of the time”. Under this program, some engineers can spend one day a week dealing only with their own ideas. The experience turned out to be successful: this scheme gave birth to Gmail, Google Chrome and Google Cardboard – a new virtual reality device.

Here are a few more negative consequences of overwork: 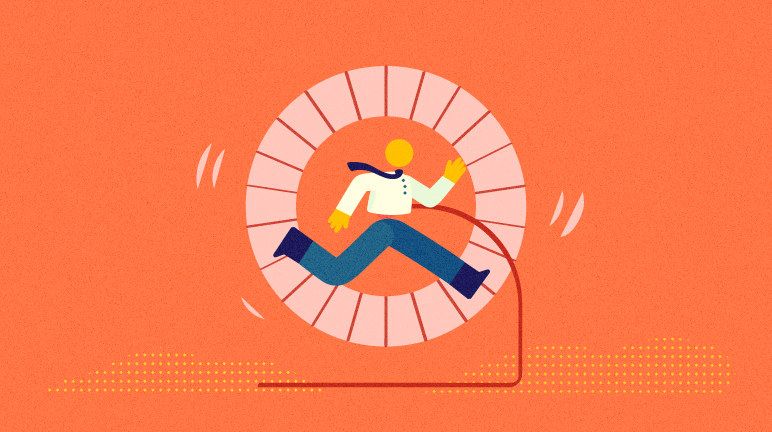 Scientists have proven: routine keeps the brain from being efficient. In 2009, researchers at the University of South Florida surveyed 730 adults about how often they engaged in typical monotonous activities: working out, living, etc. Ten years later, the study was repeated, measuring memory capacity, attention, information processing speed and verbal memory in parallel.

The experiment revealed that those who chose hobbies and actively spent their free time had better brain function than those who rested passively or gave preference to routine activities.

To automate small monotonous tasks you can use such services:

By automating repetitive tasks, you free up time and brain resources for creativity and more productive work. The key is not to get carried away with optimization, like the QA from California who automated all tasks in 8 months and hardly worked for 6 years. In the wake of this technical genius on GitHub they even posted a code for automating routine activities (from talking to your wife to making coffee).

#2. Get rid of distractions

Researchers at the University of California have proven that the average office worker breaks away from work every 3 minutes and spends up to 6 hours a day on various distractions: from noise – to an uncomfortable chair and the hanging Internet. At the same time, it takes about 23 minutes to get back to work.

This frequent attention span increases stress levels by 9%. At the same time, the task pool doesn’t go anywhere, so you have to make up for lost time overtime – and this increases the degree of fatigue by 12%. You can improve the focus in a few steps:

#3. Don’t be afraid to delegate

Delegating is often seen as a tool for managers and top executives. However, this skill will also come in handy for ordinary professionals – and even freelancers who would like to increase their income.

For example, a targeting specialist might outsource the creation of creatives to devote more time to targeting and analytics.

Working hard can mask an inability to ask for help and delegate tasks to others. For example, according to a study by London Business School professor John Hunt, only 10% of managers delegate and do so successfully.

#4. Fall in love with task lists

Without a plan, you’ll work hard – but haphazardly and not as productively as you could. Spend time at the beginning of the week writing out a basic stack of tasks, and update your list for the next day each evening.

To plan more effectively, you can group to-do’s into blocks by area of life (work, home, relationships) or time of realization (morning, afternoon, evening). You can make a to-do list in regular notes, set reminders, stick it on your calendar, or use apps:

Write down the initial task that will create momentum. And then take stock at the end of the week to see what went wrong and not rush down the road of madness to overwork. According to a Yale University study, people who live in a nervous environment (which is inherent to overworking) can have decreased brain volume. This leads to an overall reduction in its functionality.

Take care of your body: